The weakest of all Archfiend candidates, this demon chose to move to the Mortal Realm and live on his own after growing sick of life in the Infernal Realm.

Having grown up in the Mortal Realm, he has almost no knowledge of the Infernal Realm, nor of the sensibilities common to other demons.

Though constantly exhausted by the combined stress of his part-time convenience store job and fighting in the Archfiend Contest, he takes pains to uphold his pacts with the Infernal Realm.

However, he has doubts about sacrificing Childs for the Contest, and is starting to worry if he's doing the right thing.

He has no official name, though he is named Togashi Osamu in the OVA. 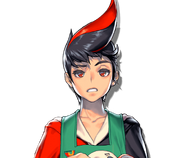 Add a photo to this gallery
Retrieved from "https://destiny-child-for-kakao.fandom.com/wiki/Master?oldid=6621"
Community content is available under CC-BY-SA unless otherwise noted.